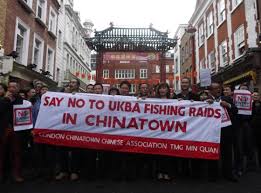 On Tuesday, 24 July 2018, London's Chinatown will witness a complete shutdown of all business premises including restaurants and shops. At noon, whistles will signal the beginning of a protest led by business and community leaders together with community activists and workers. The action will last for five hours and will also include a peaceful demonstration to the Home Office in Westminster.

The closure is in response to the discriminatory conduct of immigration and police officers during and following a ‘fishing raid’ by immigration officers on a restaurant on Thursday, 5 July 2018.

Not only were staff members at the restaurant treated with unreasonable aggression and handcuffed, a deaf and mute woman who started a peaceful protest by lying on the road was manhandled and nearly run over by an immigration van. When community leaders tried to intervene peacefully to calm the situation they too were treated with contempt and threatened with arrest.

Finally, after two hours, the protesting woman was taken to the hospital and the area declared a crime scene, partly to disperse members of the public who began to complain about the behaviour of police and immigration officers.

There are other serious concerns that need to be answered by the authorities: They include:

London's Chinatown is a vital component of London’s economy and a major tourist and cultural attraction. Its members have the right to be treated with respect and dignity and will not tolerate aggressive or discriminatory behaviour from enforcement agencies.

We urge everyone to join us in our protest on Tuesday 24 July 2018. Download the flyer HERE