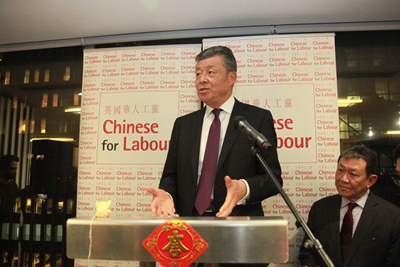 2016, the year of the Monkey, was just behind us. For Britain, 2016, without question, can be characterized as "a year of change".  The "spillover effect" of Brexit Referendum inevitably brought uncertainties and challenges to China-UK relations. The good news is, China and the UK have continued to jointly implement the agreement reached during President Xi Jinping's State Visit to the UK. We have stayed committed to building the "Golden Era" of China-UK relations. We have had effective cooperation and harvested fruitful results. And, China-UK relationship stood the test of time and change.

Politically, leaders of our two countries had a successful meeting in Hanzhou during the G20 Summit. They reaffirmed the "Golden Era" of our relations.  Towards the end of last year the three high-level dialogues between China and Britain were all successfully held.  These are:

Economically, trade and investment cooperation continued to advance. The package deal of the Hinkley Point C nuclear project was signed. And the sovereign bonds and green finance have become new highlights of our cooperation.

Culturally, China and the UK had cooperation in a wide range of areas. These include education, science and technology, culture, health, and sub-national cooperation. Our two countries have co-hosted a series of events to commemorate the 400th anniversary of the passing of two literary giants, China's Tang Xianzu and Britain's William Shakespeare. And we are now issuing two-year multi-entry visas to each other's nationals, which further facilitates mutual visits.

Internationally, China and the UK have maintained sound cooperation:

In short, our coordination on global issues is increasing and more effective.

These achievements would not have been possible without the concerted efforts of both countries. The Labour Party has made its valuable contribution:

2017 marks the 45th anniversary of ambassadorial relations between China and Britain. The past 45 years have been an extraordinary journey. The future for the "Golden Era" of China-UK relations is even broader and brighter.

Despite the uncertainties of the Brexit, in 2017 we should look at the wider opportunities:

President Xi Jinping pointed out recently at the World Economic Forum in Davos that:

Here, I wish Britain, I wish Labour and I wish China-UK relations good luck and a great success!

I wish everyone a happy and prosperous Year of the Rooster!

Read it HERE at the Chinese Embassy page