A better deal for renters 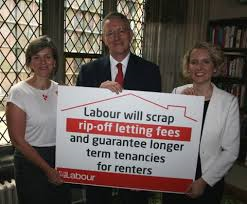 Britain's housing shortage is pushing home ownership out of reach for many people, and as a result private renting is now the norm for millions of families.

Nine million people now rent privately, including over 1.3 million families with children. Almost half of those who rent are over 35 – many of them want the same security and stability they would have if they owned their own home.

But the rules on private renting have not caught up with the way people live now. Too many people are struggling with the rising cost of renting and with the insecurity and uncertainty built into the rental market.

As well as rising rents – up on average by £1,020 a year since 2010 – letting agents' fees of up to £500 every time someone moves house have added to the growing cost of renting. And under the current system, most renters can only get short-term tenancies of six to 12 months which don't work for families looking to settle down.

On top of that, they are faced with the prospect that their rent could jump unpredictably from one year to the next – half of all families who rent say that they are worried about unaffordable rent increases.

Labour has a plan for Generation Rent.

1) We will change the law to make three-year tenancies the norm instead of the six or 12-month short-term tenancies that most renters have now – so that landlords and tenants both have more stability, but with the ability to terminate contracts early with proper notice if they have to, just as they can now.

2) We will make rent increases more predictable within these contracts, so that landlords and tenants negotiate their initial rent between them just as they do at the moment, and then review rents every year during the three-year tenancy with an upper ceiling on any rent increase. This will stop excessive rate rises out of sync with the market, and help families plan ahead and make sure landlords have a stable income.

3) We will ban letting agents from charging fees to tenants – saving renters who enter a new tenancy an average £350 – and make sure that the fees charged by letting agents to landlords are transparent so that they know what they are paying for.